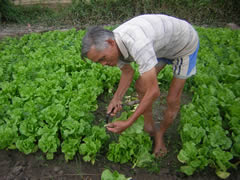 Mister Khai is not so young but he has a passion. 64 and wounded during the war, 5 children. Their education is so costly that 2 of them had to drop out. Half a hectare around their little house. Not much to provide for the whole family… in any case not more than 6 euros/person/month!

In 2005 we started with one scholarship (we cannot give more than one per household), this was little hel

p. Of course we tried to see with him how best he could use his resources. Khai is working hard in spite of his wounds, et he is always ready to try new techniques. He was elected “Model farmer 2006” by the province. His little farm is since visited by many other farmers, especially since the local television showed a documentary about him. How many people came? “Hum, I have no idea, but certainly more than a thousand”, says Khai, a little embarrassed.

For our team Khai is a great asset as he demonstrates all one can do with extremely little, when one is ready to work hard and try new ideas: raising pigs, thus a biogas which generates methane gas for the kitchen. A few dozen rabbits on the side. 3 cows in the back, and to feed them a parcel with high yield fodder. With the cow dung he cultivates worms, they in turn are given to the fish and to the pigs. He sells some too. The juice which pours from the worms basin is the best fertilizer you can think of. The pond is also a water reservoir for the dry months, Khai uses some to water his… vegetable garden. Do not ask about chemicals: Khai is also a passionate of organic agriculture! His vegetables sell very well on the local market, every day a little cash which goes a long way. As their situation has improved so much, Khai rents half a hectare to produce more paddy.

e has trebled in 2 years! No luxury: the house has not changed but the pig stall has doubled, so has the paddy field: with Khai’s family one may be sure nothing is wasted. Never again will a child have to stop going to school.

Bernard KERVYN, with Nghia, agronomist of the program. 3rd March 2007