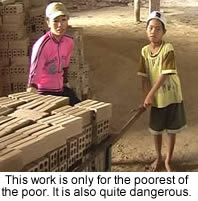 Tám and his wife are workers at the brick factory. Hard and dangerous work, together they earn 3euros/day. When there is no work, there is no pay. On the contrary, when there is too much, they are called in for extra night duty, with no overtime. They cannot refuse and they have to leave the 2 children, 7 and 9, at home.

Their world came crashing down after Christmas: Tám’s foot was swallowed by the grinding machine, torn into pieces. They kept him for 1 month at the largest hospital in Saigon, and it cost them a fortune: 800 euros, not counting the income they lost for the whole period! Thank goodness that Linh et Phú, 2 members of Thiên Chí (our Vietnamese partner), could get a certificate from the local hospital for free treatment after long queues and paperwork – in Vietnam the poorest are supposed to have free treatment. The owner of the brick factory helped a little and gave them 330 euros. The commune gave 30 euros, and the neighbors donated 290 on top. This still wasn’t enough: Tám’s wife went to the bank to borrow 400 euros, and now this loan costs them 5 euros per month in interest! The couple decided to sell their piece of land, 100 m2, on which their small house is built. Fortunately the commune intervened and forbid the deal. They would have become even poorer. Confronted with such a desperate situation and because the community was already mobilized and so generous, Thiên Chí gave some more money. But the foot would not heal – on the contrary – so they had to return to the hospital. The negative aspect of the provision of free treatment: the specialized hospital refused them access and sent them to a small second grade one. Tám got a bed but no treatment!

Thiên Chí then took over: they contacted a specialist to check the diagnosis and provide good care. Some donors have given Thiên Chí an emergency fund precisely for such cases. For the children: a scholarship so they do not drop out from school, they are living with their grand mother. We also plan to give them a microcredit loan and advice on raising pigs.

While Vietnam may still be amongst the poorest countries in the world, it is an extraordinary country. The brick factory has helped Tám. Without Thiên Chí they would not have got the certificate for free treatment, but in the end they had it. The most interesting thing is the solidarity between neighbors. Do we realize the extent of what they did? They collected the equivalent of a full year’s budget for this household. As if people in Europe would collect 15.000 euros for a poor family in their area?! The commune has not allowed Tám to sell his land: a greedy buyer could have seized the opportunity for a very small price!