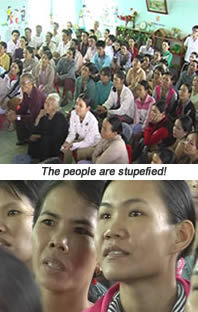 L’Odyssée de la vie”. A very moving documentary: a digital fiction which intimates the development of the fetus from conception to birth. The film captivated the Vietnamese around us who watched. After seeing the encouraging response, I thought there was no harm in trying to receive permission to make a shorter Vietnamese version.  The response came back positive and enthusiastic. Since then we continue to show the educational film to women’s groups, teachers, and hundreds of other people every week. We give away free copies of the CD at a cost of only 20 cents.

Vietnam is a densely populated country with limited resources. It has a successful family planning program. Everywhere big billboards remind people that, “Boy or girl, 2 children is enough.”  In primary schools, the number of pupils has decreased! But despite this, more than 99% of children attend school*. It was only in the recent past, about 15 years ago, that 45 children would squeeze into one classroom.  The country has more resources today, and education quality has become a top priority.  Only 25 children are allowed in each class for the optimal learning environment. More and more schools also offer education in the morning and in the afternoon.

The consensus for birth spacing and fewer children is now well regarded and shared, even though it is sometimes a sacrifice. A few years back, we landed in a rural clinic for a training session.  All of the clinic members were in terrible moods.  We asked, “What happened?” They replied, “The nurse has had a 3rd child, we have all been punished, we have had our salaries cut.” This is one example illustrating how social pressure is decisive and more importantly, how it is exerted in Vietnam. When I announced to our team that I would soon have a 3rd child, I was met with unhappy faces. They shouted, “Bernard! You live in Vietnam, you should know, you should follow the rules. Two and no more! ” I tried to explain candidly, “This child was unplanned, an ‘accident.’”  But they all looked at me with even more angry faces and continued to shrug their shoulders. In Vietnam, an ‘accident’ should be “fixed.”  Vietnam holds the distinction of having the highest number of abortions worldwide. The ratio of boys to girls is imbalanced, up to 120% in some regions.