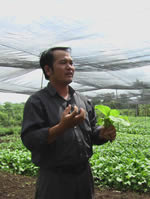 “The farmers use much too much chemical pesticides and fertilizers, and it damages the soil. We have successfully promoted better techniques for paddy, now we try also with vegetable gardens. A large net covers the whole garden, a substantial 200€ investment for Mister Quit. Quit is a rather poor farmer, so we helped him. In return he let other farmers visit his farm and soon will provide training as well. As a farmer himself, he will be more convincing than me!

“The net limits the diseases, so he can reduce the pesticides by 2/3rd! The costs are thus reduced as well, by 40%, while production has increased by 30%. The net also protects from the heavy rains: the vegetable are not smashed, they are wet but not flooded: this is crucial as one can cultivate also during the 5 monsoon months. The results are convincing: on his 600 square meters, Mister Quit has reduced his expenses from 30 € to only 11 per month. But his sales have increased from 70 € to 115.

-Then, do I dare to ask, why is it that all the other farmers do not follow immediately this model which has only advantages?

“They are afraid to fail. They all do the same, and say: “I put more pesticide just to be on the safe side!” It needs some courage to try a new technique. Nothing is worse than to loose face in front of the other farmers.”